In this series the author treats various aspects of organ music in church services as these were discussed between 1886 and 1938 in Het Orgel.  In the first installment it was clarified that the year 1938 was chosen because in that year a new hymnal was published.  This hymnal can be seen as the fruit of the Liturgische Beweging (liturgical movement) that arose in about 1900.  This final article investigates the extent to which the ideals of this movement were formulated and propagated in Het Orgel.  In the previous articles we saw that the journal and the N.O.V.  thought that good organ playing in the liturgy and sufficiently qualified organists were important.  But to what extent were these wishes inspired by the protestant Liturgische Beweging?  Were they in Het Orgel a part of a broader liturgical re-orientation 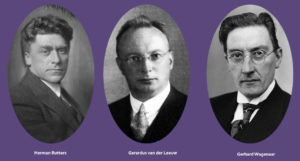