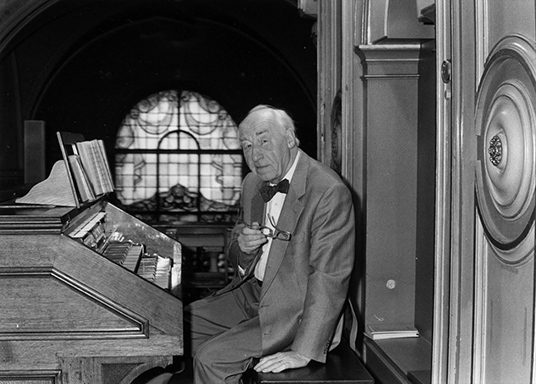 Albert de Klerk (1917-1998) completed ‘Tres Meditationes Sacrae’, a triptych on the appearances of the risen Christ to his followers, on Easter Saturday,10 April, 1993. They are as it were the result of a lifetime of improvisation in the service of liturgy, in which for De Klerk the gospel readings and Gregorian chant were inexhaustible sources of inspiration.
He wrote the composition for the Fonds voor de Scheppende Toonkunst (Fund for creative music) at the behest of the foundation Vriendenkring Lambertusorgel Helmond (Friends of the Lambertus organ in Helmond), and considered it his most important organ work. It is dedicated to his wife.
The 1st movement of the ‘Tres Meditationes Sacrae’ had been performed already on 18 October, 1992, by Albert de Klerk in Helmond. The whole composition was first performed in the Grote Kerk in Haarlem o 18 May,1993, by municipal organist Jos van der Kooy. On 11 September, 1996, Albert de Klerk made a radio recording on the Adema organ in the St.-Josephkerk, the instrument that he played for 64 years and of which the sound was decisive in the origin of the ‘Tres Meditationes Sacrae’. In 2014 Donemus published a thoroughly revised edition of the ‘Tres Meditationes Sacrae’, to which were added the registrations that De Klerk had used in his radio recording.
The article describes and analyses the 3 movements of the composition.