A portrait of Arp Schnitger? by Ibo Ortgies 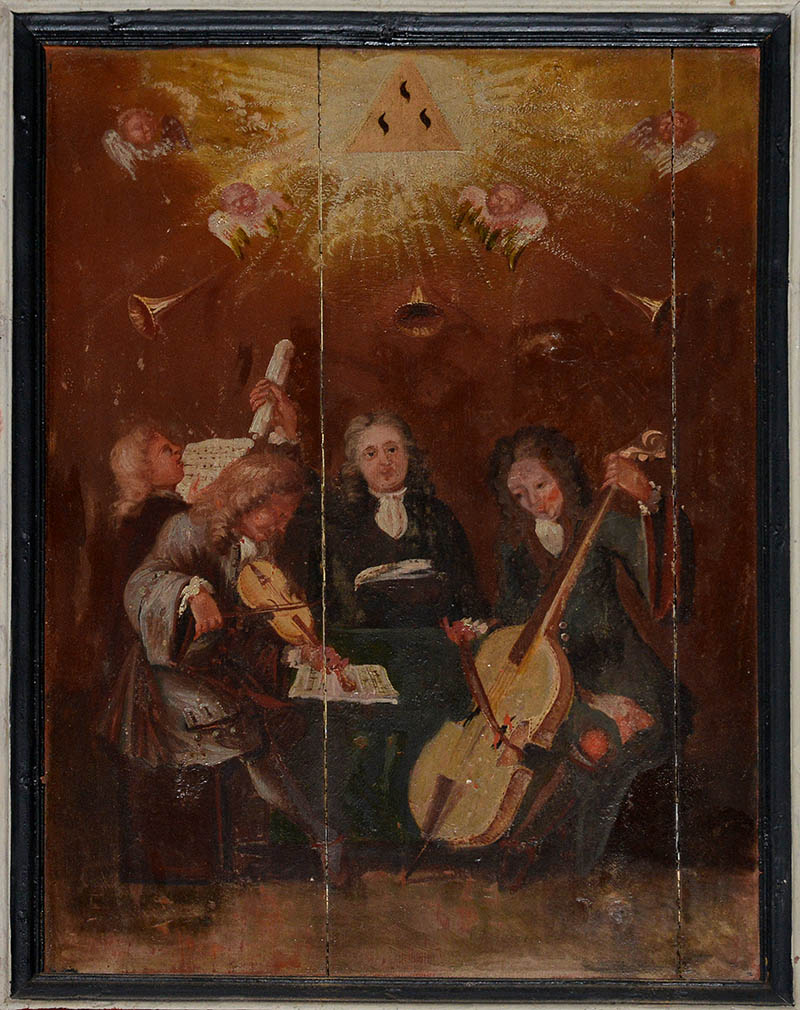 In early 2017 the organ world was startled by the report that in Golzwarden, where Arp Schnitger was baptized, a portrait of this famous organ builder had been identified on a painting that is found below and to the right of the organ on the balcony railing. This painting is one of a great number made by Christoph Walzell in 1700-1701. When the old organ was remodeled in 1697-1698, the congregation is said to have promised Schnitger that he would be portrayed in the church in the church.
The painting shows a musical ensemble consisting of 4 people: two instrumentalists, a singer with open mouth (back left, sometimes identified in the press as an instrumentalist), who appears to be singing heavenward, and in the middle a person – now identified as Schnitger – who holds a roll of paper in the air and who additionally is presumed to be a singer: his mouth is slightly open, but this person doesn’t have any legible music in front of him. The roll of paper is said to represent the Privilege that Schnitger received from the Danish king for the duchy of Oldenburg and Delmenhorst (the Danish king was duke of Oldenburg). Under the painting is the motto: ‘Mein Schall aufs Ewig weist’ (My Sound shall be eternal).
In addition, inscriptions under the organ in Hollern (near Stade) about Discantus, Alt, Tenor and Bass are presumed to have a clear relation to the painting in Golzwarden: the man depicted in the middle in Golzwarden, Schnitger, is said to be the tenor from the inscriptions in Hollern – symbol of a blameless life. Moreover, there are assumed to be interrelations with the famous painting ‘Häusliche Musikszene’ (‘domestic music scene’) (1674) by Johannes Voorhout from the Museum für Hamburgische Geschichte, which depicts Buxtehude and Reincken.
The present article studies the extent to which the assertion of Schnitger’s identity is sufficiently grounded. The author states that there are no sources of any kind that irrefutably, unambiguously, and exclusively justify the claim that the person pictured in the middle of the painting in Golzwarden is Arp Schnitger.