The organ in Engwierum. A typical Van Dam sound in an atypical case by Sietze de Vries 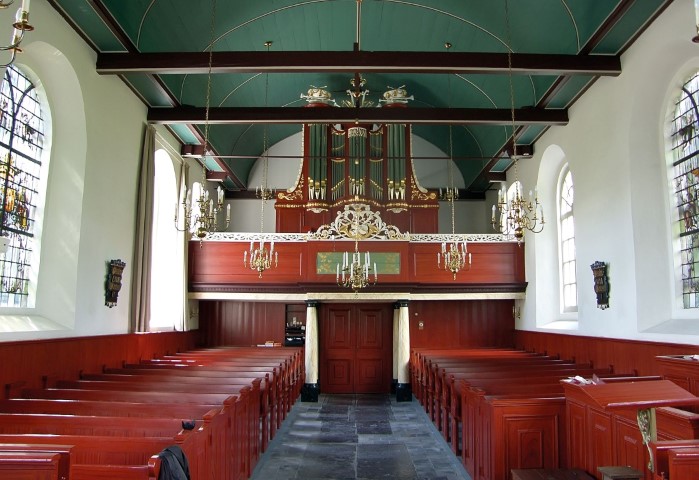 The restoration of the Van Dam organ in the church in Engwierum was completed in 2015 by the firmof Bakker & Timmenga. Theo Jellema was the consultant, after the death of Jan Jongepier, who had served in this capacity until 2011.
The organ dates from 1823 and is unusual in several ways. The façade is unique in the oeuvre of Van Dam. Especially striking is the low central tower; it is reminiscent of the organ of Freytag (and S(ch)nitger Jr.) in Zuidhorn (1793).
The instrument was not greatly altered in the course of time; the most significant work was the replacement of the three wedge-shaped bellows by a reservoir in 1885 and the addition of an electric blower in 1936. Bakker & Timmenga did more work in 1957: the most important then was the reracking of the pipework to bring the instrument to ‘modern’ pitch (a1 = 440 Hz): a half-tone higher than previously.
Jan Jongepier had in 1994 made up a restoration report, with the original Van Dam situation as the goal, though the reservoir from 1886 and the added 16’ Subbas were to be maintained. The restoration began finally in 2014.