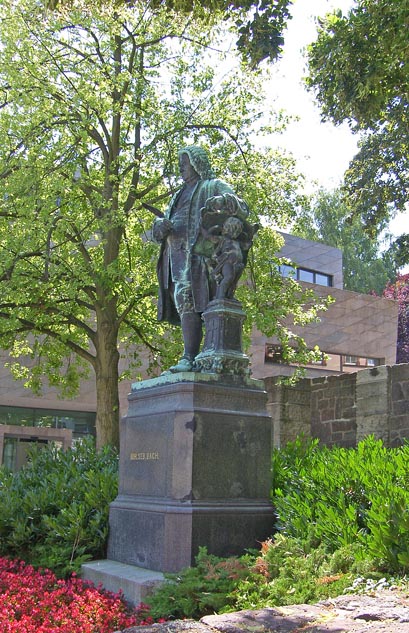 The famous Fugue in E-flat (BWV 552b), which closes the so-called organ mass of Johann Sebastian Bach, has already received much attention. Of greatest interest were the relationships between the three fugues of which BWV 552b is composed. The second of the three fugues was rather neglected in favor of the other two, so it has been given extra attention here.
The article gives a reasoned guide for the player, based on the generally accepted view that Bach intended with the E-flat fugue an homage to the holy Trinity. Arguments are presented that are derived from theology and numerical relationships. From the published opinions, in particular about tempo relationships among the three fugues, the simplest and most convincing has been chosen. The author adds a number of new insights, for example the relation between the subject of the second fugue and the chorale setting ‘Christ unser Herr zum Jordan kam’ (BWV 684). Another insight is the fact that in the original print the fugues were not separated by double bars. This fact sheds a special light on the way Bach wanted to present the Trinity in sound: of course as three clearly differentiated personalities, but subsumed in a large musical unit, which is again emphasized by the dovetailing of the fugues: when the new subject appears, the other voices continue in longer notes, particularly at the transition from 1 to 2. The article argues that Bach in BWV 552b has presented the Christian dogmas that the Son was born of the Father and that the Spirit comes forth from the Father and the Son.
The author argues that in a composition in which numerical relationships and theology play such an intriguing role, the tempo relationships between the three parts should be precisely chosen, although of course with all individual freedom with regard to a metronomically exact basic tempo and with room for expressivity and flexibility, leading to a personal interpretation within Bach’s theological and cabbalistic framework.