Johan Rudolf Gravelotte, a forgotten organist of The Hague by Herman de Kler 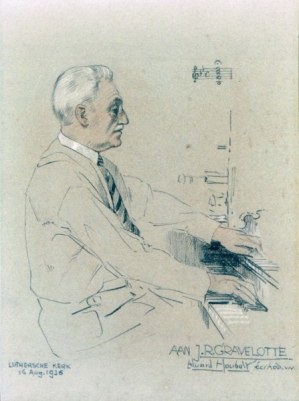 Johan Rudolf Gravelotte (1875-1943) was an organist and pianist who played an important role in the musical life of The Hague. Gravelotte came from Enschede and studied at the Royal Conservatory in The Hague, and was then organist at the Nieuwe Kerk in The Hague and the Waalse Kerk in Delft. In 1905 he became organist of the Lutheran Church in The Hague. He was involved in the restoration of the famous Bätz organ of 1762 in this church, which was carried out in 1921 and in which the instrument was given a swell division. When Gravelotte died in 1943, he was succeeded by Feike Asma.