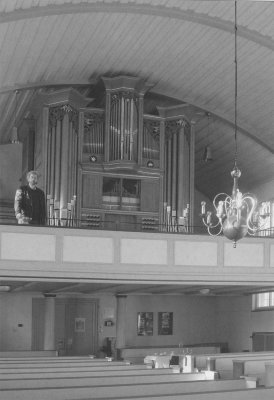 In 2002 the organ building firm of Van der Putten (Finsterwolde) completed a new organ in the Evangelische Kirche at Walle, a suburb of Bremen (Germany). It is built in a 17th-century style, inspired by the organs of builders like Stellwagen. The instrument has meantone temperament and split sharps. In 2003, Van der Putten reconstructed the Janssen organ in the Reformed Church at Aurich (Germany), originally built in 1838.
The organ at Walle sounds convincing; characteristic is that the treble of the principal chorus has a more ‘fluty’ quality than that of the Stellwagen organ in the Marienkirche at Stralsund. The touch of the organ is pleasant and the subsemitones are easy playable, allowing performance of ancient music in a historical way. The façade of the organ is derived from the Northern European organ building style of the 17th century. Consultants were Gebhard Kaiser and Harald Vogel.
The organ at Aurich has a completely different concept. Based on the one-manual specification of 1838, Van der Putten developed an organ with Hauptwerk and Oberwerk. The subtle attack of the pipes allows various registrations. The unity in the sound and technique of the organ demonstrates the high level of craftsmanship of organ builders in Northern Germany in the early 19th century.
Organ building firm Van der Putten shows with these projects that it has become a mature company, familiar with several styles.