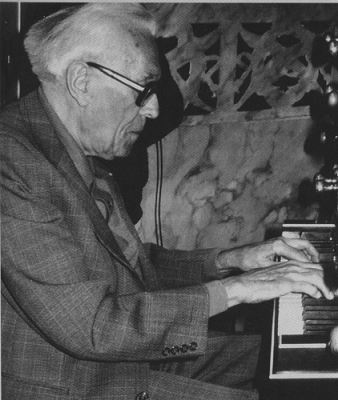 The Dutch organist, composer and improviser Cor Kee (1900-1997) was a many-faceted person with broad (musical)cultural interests. His work combined several streams of Dutch organ culture of the 20th century. Kee came from the romantically oriented organ school of Jan Zwart. He remained true to this heritage, though he followed new paths after the Second World War. His broad view confronted younger organists in an inspiring way with the new directions which he made his own in later life. Kee was certainly not in the very forefront in the area of musical innovations; those positions were already occupied by the international avant-garde (Boulez, Ligeti, Kagel, Cage). It was particularly as a gifted teacher of improvisation that Kee developed in amateurs and professionals a healthy musical consciousness, by being self-aware and passionately receptive to modern trends. Moreover, Kee possessed a healthy inner balance with respect to romanticism and old(er) music, and he was able to inspire and stimulate. This fresh attitude is evident in his compositions as well. The unaffected clarity with which Kee orders and uses his musical material in his compositions is characteristic. And although in his later works a certain rigidity and at times an extreme naïveté can be found, his uvre deserves more attention than it has received in the past.