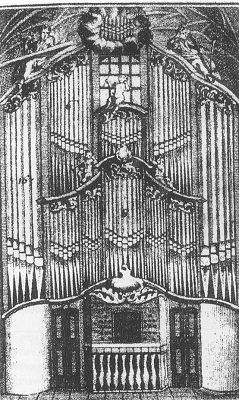 The former East Germany had its own flourishing organ culture, as a result of its large inventory of historical organs and the fact that the church, which was not integrated into the socialistic structure of society, was a refuge where people could catch their breath. East Germany also had a long tradition of church music. The establishment of five church music institutions supported the liturgical life of local churches in East Germany. Nevertheless, the church experienced political pressure, and it was difficult to get musical scores and to publish new church music. As a result, we have few sources.The development of liturgical organ playing was, as in West Germany, strongly influenced by the Orgelbewegung. Johannes Weyrauch was influential as composer and teacher in the continuation of this trend. He also emphasized the evangelical element of church music. Otherwise than in Western Europe, chorale playing developed hardly at all, returning in general to traditional classical forms in a very moderately modern style. Church music was primarily functional in intention: it was required to be accessible to the congregation. The church was, after all, the place where one could feel at home, and that required understandable music. Manfred Schlenkers publication of chorale-preludes by DDR composers is an important contribution.The uvre of Volker Bräutigam occupies an individual place. He was one of the few composers who used a clearly modern style in his chorale-preludes. He was also one of the first who wrote jazz-oriented chorale-preludes. Several organ composers were less conservative in their non-organ compositions.Due to the not very modern, ergo rather dated, style, and the fact that the compositions are difficult to find, they will never become current. Nevertheless, this style is valuable. For one thing, the works are recognizable and functional because of their familiarity and their evangelical element. In addition, the development of the chorale-prelude is an element of the history of the DDR, which illustrates how (cultural) factors interact.