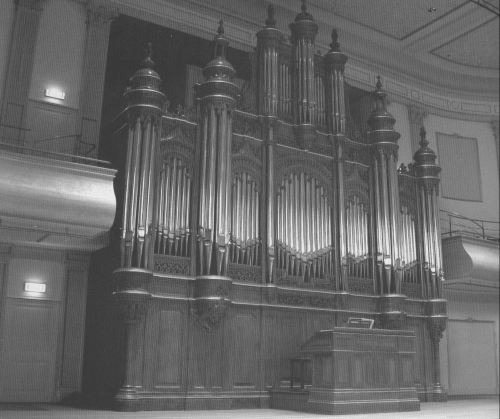 The Cavaillé-Coll organ in the Philharmonie in Haarlem
Het ORGEL 102 (2006), nr. 5, 26-42 [summary]
At the end of the 19th century the use of the Cavaillé-Coll organ in the Amsterdam Palace of Industry diminished, and at the beginning of the 20th century the instrument was offered for sale. Louis Robert, then municipal organist in Haarlem, found two patrons who were willing to buy the instrument. These patrons imposed the condition that Haarlem would provide a suitable location for it. In 1917 the instrument was dismantled and placed in storage. The city of Haarlem decided in 1920 to buy the buildings of the club De Vereeniging and to convert them into a municipal concert hall. Three years later a permit was granted to erect the organ in this hall.The re-erection was carried out by Sybrand Adema. He replaced the original mechanical-action slider chests by pneumatic cone chests with a new console. The disposition remained virtually unaltered. After the key action had been partly electrified in 1939, it was completely electrified in 1965. Again a new console was provided, and the organ was enlarged with a number of new stops.In 2001 the organ was dismantled again, during a thorough restoration of the Philharmonie. Two years later Flentrop Orgelbouw was commissioned to carry out a complete restoration of the organ. The situation as of 1875 was to be the goal. The original wind chests of the Grand-Orgue, Positif, and Pédale were reïnstalled, as was the Unda Maris which had been removed in 1965. In conformity with the original design a 4 Dulciana was added to the Récit. The wind system, the console, and the actions have been reconstructed on the basis of data offered by the instrument itself and with data from other Cavaillé-Coll instruments. Both technically and musically Flentrop has succeeded in convincingly revitalizing an instrument that is unique in The Netherlands.