An unknown activity of Charles-Marie Philbert by Victor Timmer 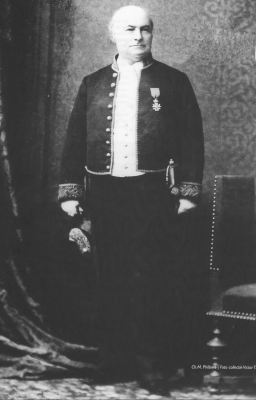 The French diplomat and organ expert Charles-Marie Philbert is known in The Netherlands primarily because of his rôle in the building of the Adema organ (1871/1887) in the Moses and Aaron Church in Amsterdam. In addition he was active in getting the Cavaillé-Coll organ placed in the Palace of Industry (the instrument is presently in the Philharmonie in Haarlem).

In the years before he moved to Amsterdam, he was active in Den Helder. First he was principally active in his spare time as organ builder for the local parish church (1856-1859), as has been reported in Het Orgel (July/August, 1995).

The present article describes the years from 1859 until his departure for Amsterdam, and shows him – besides his function as examiner of the new Flaes organ in the Baptist (doopsgezinde) Church – in a completely different rôle, to wit as the enthusiastic and highly appreciated conductor of the choir Cecilia.

A number of works of Philbert himself received performances in the choirs concerts. Of the works by him mentioned in the article, among which an aria from an opera, nothing has been preserved so far as is known, so that a reliable opinion of his compositional talent can not yet be given.