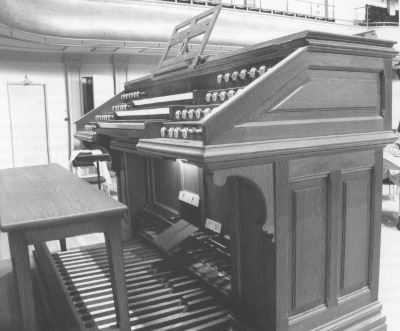 In 1875 a large Cavaillé-Coll organ (III/ped/46) was purchased for the Amsterdam Industry Palace, which was the most important location for concerts in the capital until the opening of the famous Concertgebouw in 1888. At that time Dutch organ building was rather conservative and based on German principles. The builder Aristide Cavaillé-Coll, who was already celebrated in Europe, had built large concert instruments for Bracewell Hall, Sheffield and Manchester in the seventies, but was nevertheless quite unknown in the Netherlands. His ideas were radically different from the current Dutch style. The French consul residing in Amsterdam at that period, Mr. Philbert, who had been trained in the Cavaillé-Coll company, went to great effort to get the French symphonic organ style introduced in the Netherlands. In previous years he had been the consultant for the Adema organ in the church of Moses and Aaron in Amsterdam, which had double wind chests, Barker levers, swell boxes, combination pedals, new voicing techniques etc. The new orchestral style of interpretation, developed by Lemmens, Guilmant, Widor and Mailly, was already celebrated. An Association for the Advancement of Organ Music prepared the financial acquisition of the instrument. In the last days of October 1875 the organ was inaugurated by Guilmant; Widor, Vierne and Saint-Saëns were later invited to give recitals. From 1879 to 1895 Jean-Baptiste de Pauw of Brussels was the titular organist. By 1916 however the instrument was scarcely used any more, and was bought by two wealthy art lovers, to be placed eight years later (with pneumatic action) in the present Haarlem music hall Philharmonie. From 2004-2006 the well-known firm of Flentrop Orgelbouw at Zaandam restored the instrument to its original state.