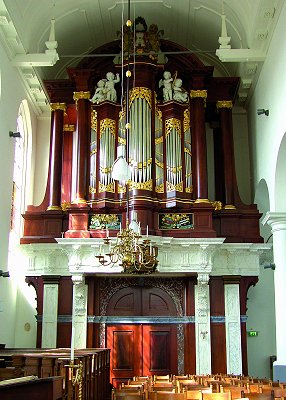 Through the centuries the Kapelkerk, built at the beginning of the 16th century, in Alkmaar had a head start because of the high quality that was pursued for organs in the Grote Kerk in the same town. The first organ in the Kapelkerk dates from 1542 and stood originally in the Grote Kerk. This instrument had no liturgical function until 1670. In 1656 Jacobus van Hagerbeer worked on the organ, and in 1705/1706 Johannes Duyschot modernized the instrument. About twenty years later, in 1726, the Kapelkerk got a new instrument, built by Frans Caspar Schnitger, but this organ was lost during a fire in 1760. In the same year Christian Müller and his son Pieter were commissioned to build a new instrument, which was finished in 1762. Until the eighties of the 19th century the organ underwent no important changes. Organbuilder Lodewijk Ypma modified the organ radically in 1882. During a restoration in 1939/1940 several historical stops disappeared. In the period 2001-2004 Flentrop Orgelbouw restored the organ. This restoration was in general a reconstruction of the situation of 1882. Consultant was Jan Jongepier. Flentrop Orgelbouw succeeded in reviving the last instrument of Christian Müller in a convincing way.