Friedrich Ladegast: pioneer of the modern organ by Wim Eradus 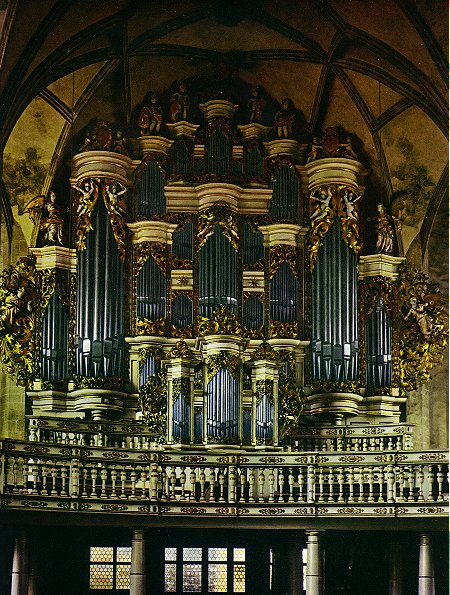 A century ago, in 1905, the German organ builder Friedrich Ladegast died (he was born in 1818). Already as a child Ladegast was fascinated by organbuilding. He developed a strong admiration for the organs of Gottfried Silbermann. He learned the trade from Kreuzbach, Mende and Zuberbier. Characteristic of Ladegast is his interest in the theory of organ building, in those days the field of Johann Gottlob Töpfer; in this respect, he was quite modern. Inspired by the French organ builder Aristide Cavaillé-Coll, he introduced pneumatics in Germany, i.e. the Barker lever (for the keys) and the moteurs à double effet (for the stops).
At Weissenfels, where Ladegasts company was located from the start in 1864 until the end in 1944 (his son Oscar took over the firm in 1888; it never flourished again), a memorial symposium was held in 2005. Lectures were presented by Ladegast experts Hermann J. Busch and Alexander Koschel, among others. They referred to the large instruments that had made Ladegast famous, such as the organs in the Dom at Merseburg (1855, the organ that inspired Franz Liszt to writing organ music), the Dom at Schwerin (1871) and in the Nikolaikirche at Leipzig (1862, renewed by organ builder Eule in 2005, with reference to Ladegasts original concept; one of the consultants was Hermann Busch).
With these instruments, Friedrich Ladegast established the basis for the development of the modern organ, the organ type that would characterize German organ culture around 1900, especially with the instruments of Wilhelm Sauer and, later, Oscar Walcker.