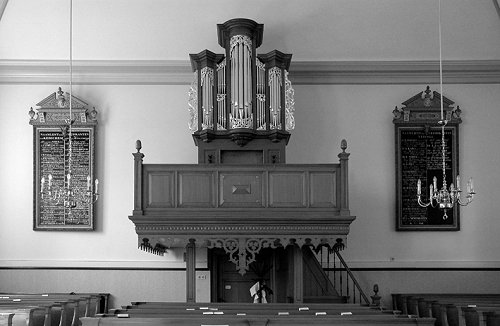 Organ building firm Gebr. Reil completed some interesting projects in the past few years: the reconstruction of the Van Rossum organ in the Reformed Church at Heelsum (2004), the building of the new organ in the Jachtlaankerk at Apeldoorn (2004), and the reconstruction of the organ at Kedichem (2003), which appears to have been built by Gerstenhauer. The diversity of these projects represents the current standards at the Reil company quite accurately.
The organ of Kedichem was deteriorating at Sleen, where it had been moved in 1927. Its oldest parts date from the early 18th century; the case, made by Gerstenhauer, from 1794, was moved with the organ from Zuidhoorn to Medemblik. Plans for restoration at Sleen were not successful, enabling the church at Kedichem to acquire the instrument in 1999. The Reil company reconstructed the organ in the style of Gerstenhauer; Aart Bergwerff was consultant.
The organ of Heelsum has also been saved from ruination. The instrument was built by Dirk van Rossum in 1864 for the Reformed Church at Abcoude. It was bought by the church of Heelsum in 1998, and was placed in the organ case made by Verweys that this church possessed. Jan Jongepier was consultant.
The new organ at Apeldoorn was built without a consultant. It is interesting to notice that the organ builders, in the voicing of this instrument as well as that of the old instruments at Kedichem and Heelsum, strive to achieve a convincing balance between a certain roughness and, on the other hand, flexibility and poetry.