Unknown for no good reason: the music of Bernard Bartelink by Kees Weggelaar 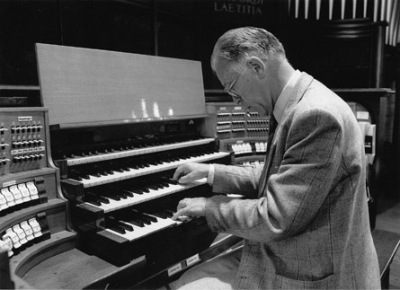 Bernard Bartelink (1929) was not only the organist of the Cathedral Basilica St. Bavo at Haarlem: he is composer as well. The organist Bartelink studied with great musicians like Anthon van der Horst and Cor Kee; the composer Bartelink was a pupil of Léon Orthel, whom he describes as a philosophical-sober and cautious-distant man.
Bartelinks music is not avantgardistic; it is meant to be useful. In his early years, Bartelink was musically oriented toward France, but later on he preferred a more polyphonic style. One of his most important organ works is the energetic Toccata (1954). Important as well are Sonatina (1957), Praeludium, trio en fuga (1960), Prelude, fugue et hymne sur Honneur à toi, glorieux de la Salle (1995).
Bartelink composed relatively few organ pieces; his uvre includes considerably more vocal works. Many of his compositions are published, by companies such as Donemus (Amsterdam).