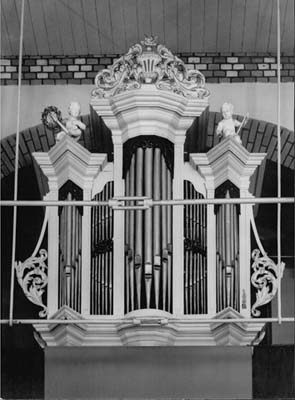 Early 17th-century pipes made by organ builder Anthonie Verbeeck for the former organ of the Jacobijnerkerk at Leeuwarden survived when organ builder Jan Harmens reused them in the organ he built for the Reformed Church at Brantgum. This instrument was sold to the Catholic Church at Dokkum in the 18th century; organ builder Albertus van Gruisen built a new instrument in 1808 and reused the old Verbeeck pipes again, as well as some parts of the case of the Harmens organ. In 1872, the organ was enlarged to become an 8-foot instrument. It was in this state that it survived in the Reformed Church at Boerakker, where it was replaced with a new instrument by organ builder Albert de Graaf in 1991. De Graaf is nowrestoring the Boerakker organ.