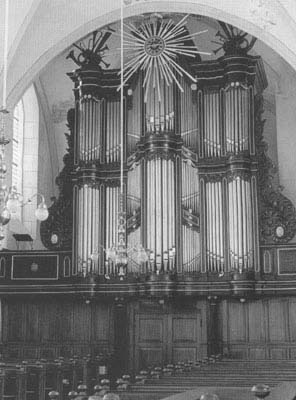 Petrus van Oeckelen (1792-1878), son of organ builder Cornelis van Oeckelen (1762-1878), who lived in Breda, was a musician of varied talents. In 1819 he moved to Groningen. After about twenty years of working as an organ builder, he founded his own workshop in 1838 at Harenermolen, near the city of Groningen.
Van Oeckelen seems to have been influenced by his colleague Witte. He also probably took over part of the inventory of his colleague Timpe. Van Oeckelen was on good terms with Samuel Wolther Trip (1804-1886) as well, an influential personage in the Groningen organ scene.
After Petruss death, the company expanded under his sons Cornelis Aldegundis (1829-1905) and Antonius (1839-1918). It had a wide market; between 1818 and 1918, Van Oeckelen built over a hundred organs and rebuilt forty.
Whereas the sound of the organs built by Petrus van Oeckelen still refers to that of the Groningen organs from the 18th century, the instruments built by his sons have more 8 stops, and, according to authors like Godefroy, better sound quality.
Compared to other organ builders like Maarschalkerweerd however, the Van Oeckelen company remained rather conservative. Hence a typical Van Oeckelen-style was developed in the course of the hundred years that the company existed.
In the 20th century, many Van Oeckelen organs were rebuilt. Mense Ruiter was one of the first organ builders to approach the instruments with more respect; nowadays, they are rehabilitated completely. One of the interesting effects of this development is that the organ in the Der Aa-Kerk at Groningen will probably remain in the state it has been in since Van Oeckelen rebuilt the work of Schnitger and Timpe in 1858.