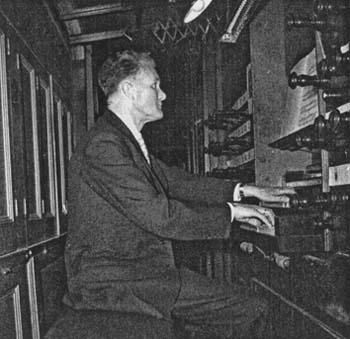 In 1932, Henk Loohuijs, bank employee at Amsterdam, was appointed organist of the Nieuwe Kerk of the Dutch capital. Loohuijs, who possessed the A-certificate of the Dutch Association of Organists, was one of the fourteen organists who applied after the death of A.W. Rijp, the former organist of the Nieuwe Kerk. Only three of their names are known today: apart from amateur Loohuijs, the professional organists Adriaan Engels and Klaas Bakker had applied as well. The jury consisted of Frits Rootlieb(Loohuijss teacher), Frans Hasselaar and Wouter Westerhoud. They advised the appointment of Adriaan Engels, but the Committee of Supervision over the church servants recommended Loohuijs. Loohuijs had an advantage: he had been assistant to Rijp over quite a long period. It is also possible that the committee hoped to get a less expensive organist, as the other two would have had to live from their earnings. The jurys advice was neglected; Loohuijs got the appointment.
The scarce archives show that Loohuijs preferred large organ works and that he gave recitals in the Oude Kerk, in the same series of concerts in which Feike Asma and Piet van Egmond appeared. The general opinion seems to have been that Loohuijs did not really belong to their realm. Loohuijs appears to have written a short history of the organs in the Nieuwe Kerk as well.
Shortly before Loohuijs had planned to retire, the Nieuwe Kerk was closed for restoration (1976). Afterward, he was only given the opportunity to take leave of his organ in private.