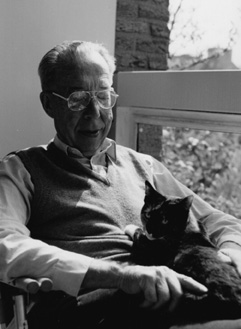 Dirk Andries (Dick) Flentrop (1 May 1910 – 30 November 2003) was truly a homo universalis: by no means was he interested only in organ building. At the same time, he was very dedicated to his native city Zaandam: he continued, in 1940, the organ building firm his father had founded there in 1903.
After a meeting with Albert Schweitzer, and after studying the writings of Christhard Mahrenholz, Flentrop decided to follow his own course. He explained his ideas in a pamphlet in HET ORGEL in 1934, entitled Slider chest and Rückpositiv. It implied that he had to work in another direction than that of the electropneumatic organ, which was still popular in those days. An important instrument among those that show how Flentrop translated his theories in practice, is the organ in the Grote Kerk at Wageningen (1943). Flentrop had to fight the wishes of advisory councils and their representatives as well; in particular Arie Bourman (in the 1930s) and Lambert Erné (in the 1950s) did not exactly stimulate the expansion of Flentrops firm. Flentrop nevertheless managed to expand the company, especially by acquiring orders from the United States.
Although Flentrop chose to build tracker organs with slider chests, this did not imply that he would copy old organs, although he did suggest that that might be an option in his 1934 pamphlet; he strove to develop a 20th-century organ instead.
As a homo universalis, focusing on perfection and innovation, Dirk Andries Flentrop can indeed be compared with Aristide Cavaillé-Coll.