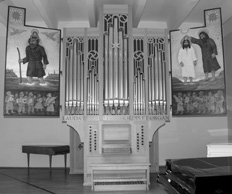 Estonia is the most northerly of the three Baltic countries. Its capital city, Tallinn, became a member of the Hanseatic league in 1284. Estonia became independent in 1991, and is rapidly developing into a modern state.
As Estonia has suffered many wars, no organs remain from before 1800. Two important younger instruments are the Ladegast/Sauer organ (1878/1913) in the Cathedral at Tallinn, restored in 1998 by Christian Scheffler; and the Mülverstedt organ in the village church at Vigala (1886).
To facilitate the playing of music from before 1800 on an instrument in a comparable style, the Estonian Music Academy in 2001 commissioned the German organ builder Martin ter Haseborg to build an instrument in 18th-century North-German style.
Organ culture has a firm basis in Estonia. The annual international organ festival, which offers a wide variety of concerts, receives tremendous attention, not least from the major media.