Organ sound and organ philosophy: the world of Bernhardt Edskes by Hans Fidom 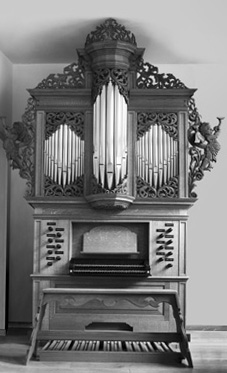 Organ sound and organ philosophy: the world of Bernhardt Edskes  Hans Fidom
The way the Dutch/Swiss organ builder Bernhardt Edskes (his company is located in Switzerland) works is based on a quite remarkable philosophy. To Edskes, man is a historical fact, attached to the parameters of his specific time and place. Some people manage to break through the boundaries of these parameters. The reason that they are able to do so has to do with genetic aspects of the persons in question. Edskes names composer Johann Sebastian Bach and organ builder Arp Schnitger as examples.
In Edskess view, the organ is a historical instrument: it is built with materials that were chosen long before our own times, such as wood and tin. People who expect other sounds from the organ than it is built for, should design a new instrument instead of exploring the borders of what the organ is capable of.
Edskess works, which include restorations of several historical organs (for example in Melle, Germany) and new instruments throughout Europe, is known for reflecting the way Arp Schnitger worked, but that doesnt mean that he is not interested in other styles. He restored several 19th-century organs as well, for example in Västra Eneby (Sweden, 1850).
Edskess organs are distinguished by their impeccable voicing. To Edskes, allowing unevenness just is a pseudo-romantic aberration.
Bernhardt Edskes quotes, in order to explain his way of working in a nutshell, a poem by the Swiss author Gottfried Keller (1819-1890): Lasset uns am Alten / Wenn es gut ist halten / Neues machen jede Stund / Aber aufgebaut auf altem Grund [Let us stick with the Old / When it is good / Make new things any time / But built on old traditions].