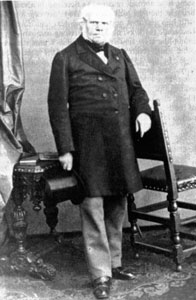 At the start of the 19th century, Catholic organ art was judged rather negatively by quite a few publicists, especially in France en Belgium; some even spoke of degeneration.
The recitals given by Adolf Friedrich Hesse (Breslau) in Paris and Brussels in 1844 did not change that situation, although he drew attention with his performance of Bach. Only much later would his influence become substantial at the Brussels Conservatory, via Jacques-Nicholas Lemmens. That is to say: that was what was believed in those days, since the importance of Lemmenss education at the German city Breslau (today Poland) was strongly exaggerated.
Lemmenss appointment as organ teacher at the Brussels Conservatory in 1849 was the idea of François-Joseph Fétis, who had become director of the Conservatory in 1833. Fétis aimed at improvement of the organ culture of the Catholic part of Europe. Because of his admiration of Bachs compositions, he looked for inspiration in Germany. Fétis thus supported the German organ builder Bernhard Dreymann from Mainz, who built several organs in Brussels in the 1840s; furthermore, he appointed Christian Girschner as organ teacher in 1842. Soon, Girschner became very important, by founding choirs and a church music school in Brussels  even more important than Fétis himself, who decided thereupon to appoint Lemmens in Girschners place. Fétis praised Lemmenss theories strongly, emphasizing the German influence in his work. Ewald Kooiman, Ludger Lohmann and others, however, have shown convincingly that Lemmenss German roots lack any substance.
Among Lemmenss pupils, Clément Loret in particular deserves attention: he developed an organ theory of his own as a teacher at the École Niedermeyer at Paris. It was only in 1890 that Lemmenss points of view were introduced at the Paris Conservatory, by his pupil Charles-Marie Widor; until then, César Franck had been responsible for a completely different approach.