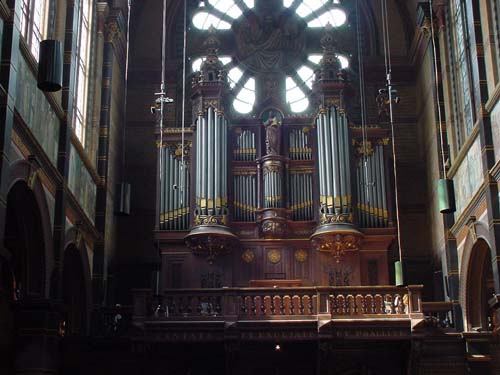 In 2001, Organ builder Verschueren (Heythuysen) finished the restoration of the three-manual Sauer organ in the St Nicolaaskerk at Amsterdam (Ton van Eck was consultant). The organ was built in 1889 in the new church, in a case that was designed by the architect of the church, A.C. Bleys, based on a drawing of Sauer. The disposition mirrors Wilhelm Sauer’s interpretation of the German ‘modern organ’, as it had developed at the end of the 19th century: the 8′ stops are set up in sets of two (a fundamental stop and a stop with more clearly audible overtones), but recall Cavaillé-Coll’s principles at the same time, since each manual has a Principal, a string, a harmonic flute and a (half-)stopped flute.
In the 20th century, Sauer worked once again on the organ (1904); then Bernhard Koch (1914/1921/1928/1931) maintained it. Adema/Schreurs changed the instrument in 1960: the Gamba on Manual I, one of the most important stops in Sauer’s concept, was removed to make place for a 2 2/3′ Quinte; other string stops were cut -off to make ‘baroque’ stops such as a Nasard and a Tierce.
Organ builder Jean-Marc Puet, appointed organist of the St Nicolaaskerk in 1975, began to reconstruct the original situation. He placed, for instance, a Salicionaal from a Valckx & Van Kouteren organ on the slider of the Gamba. Puet was succeeded by Henk Verhoef. He found several old Sauer pipes among the remains of the Sauer organ at the Stadsgehoorzaal at Middelburg (1902).
These pipes were used by Verschueren; with them, almost the entire original specification could be reconstructed. It is remarkable that the Gamba has not been reconstructed; the much milder Valckx & Van Kouteren Salicionaal was retained. Also, the wind system was not completed (Martin Boltes recalled in het ORGEL in 1889 that the organ had three horizontal bellows; in the meantime the organ seems to have lost one, as there are now only two). The wind was stabilised by adding concussion bellows.
The organ sounds as if reborn. The organ builder has proceeded very reticently, with respect to both the technique and the sound. The result demonstrates how valuable this way of restoring is. 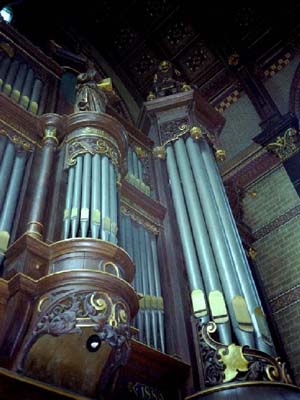