Does history repeat itself? On the importance of early 20th century organs by Hans Fidom 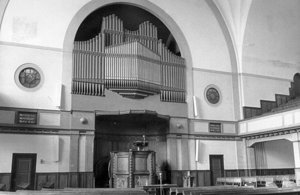 The main criterion for determination of the value of an organ type is the question whether valuable music was written for it. With regard to the Dutch organs that were built according to the principles of the German contemporary organs in the early 20th century, the answer is affirmative, although the music in question is mainly of German origin. Consequently, the second criterion is the more important: does the organ to be evaluated have a convincing sound, is it well-built?
To give an impression of the way early 20th-century organs are approached nowadays, this article portrays four organs: Pieterburen (Leichel 1901, the sound is not quite convincing, but it has a very interesting technique; it is well-preserved), Wildervank (Walcker 1913, a very important organ; lost much of its beauty in 2001, when organ builder S. de Wit worked on the instrument), Amsterdam, Parkkerk (Sauer 1922, as important as the Walcker organ; in bad condition), Amsterdam, Nassaukerk (Valckx & Van Kouteren 1931, is being changed at the moment, losing rather much of its historical value).
The problem with many of the organs that were built by Dutch firms after 1900 is that they are convincing in many respects, but not all. Valckx & Van Kouteren for example had difficulty in voicing the higher stops as attentively as the 8′ stops.
At Wildervank and the Nassaukerk at Amsterdam, the situation is clear: here history repeats itself, as important historical organs are adapted to the wishes of a later time. It’s time to stop this development. The first step is to get to know the music that belongs to these organs.