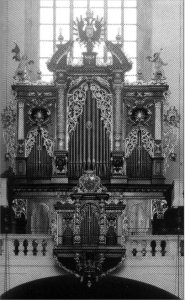 On 17-22 September 2000 the completion of therestoration of the Mundt organ in the Church before the Tyn at Prague wascelebrated with a series of festivities.  Theorgan was built in 1673 and is one of the most representative 17th centuryorgans in Europe.

The City Council of Prague contracted Mundt in 1670. Neither the contract nor other archival material is preserved. Some of it, however, has survived via secondary literature.  At the examination of his work in 1673, Mundt was criticised:he was, for instance, forced to change the specification of the organ. At the second examination, Mundt was confronted with additional wishes. At the end of 1673, the organ could finally be inaugurated.

In 1682 Mundt repaired the organ; a great fire in thechurch had damaged it in 1679.  ‘CourtOrgan Builder’ Josef Gartner restored the organ in 1823: he moved the organbackward, moved the bellows, lowered the pitch and retuned it in equaltemperament.  In 1843, Gartnerrestored the organ again; he revised the Salicional of the Great at thisoccasion.  Emanuel Petr restored theorgan in 1895.  It is not clear whathe did; the organ shows that other organ builders worked on it as well.  In 1990, the organ was tuned in a Werckmeister temperament.

In 1998-2000 the German organ building firm Klais(Bonn) restored the organ with German money; a condition was that therestoration should be carried out by an organ builder from the same region asMundt.