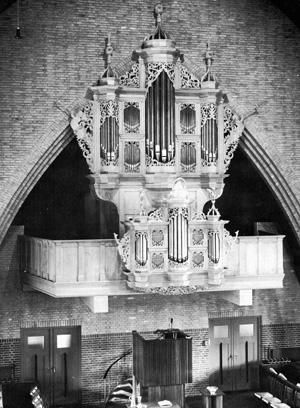 Organ builder AlbertReil (1942) died on 16 December 2001. His father Johann (1907-1960) had founded an organbuilding company in 1934; he moved to Heerde in 1937. Albert came in charge after thedeath of his father. He had studied pipe making since 1959 with Busch (Herten, Germany).His brother Han studied organ building with Kuhn (Männedorf, Switzerland) during severalmonths, and joined the company in 1963.

The conviction that an orientation to baroque organ building was necessary was stronglystimulated at the Arp Schnitger Commemoration in Groningen in 1969. The GebroedersReil chose to pioneer: they began making organs based on historical examples. Theorgan in the Julianakerk at Scheveningen, for instance, is strongly related to the ArpSchnitger organ at Uithuizen (1701). This led eventually to typical Reil organs such asthe one in the Praemonstratenzer Church at Schlägl (Austria, 1989) and the Dom atStavanger (Norway, 1992).

Later on, organs from other historical periods were studied equally seriously.Reils most recent project illustrates this best: a new instrument was conceived,based on a 1920 Standaart organ, in the Gereformeerde Kerk at Heerde. It was inauguratedsome weeks before Albert Reils funeral; he himself was present.

Today, Hans Reil, Hans son, is in charge. Reils order book is as alwayswell filled with assignments in The Netherlands and abroad.