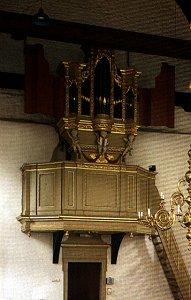 In 1657, HansGoldfus (educated by Florentius Hocque, worked in Belgium as well), built an organ in theGasthuiskerk at Delft. It was reconstructed by K.B. Blank & Zn. in 1975. Since thebalcony appeared to be sagging, the organ had to be restored once again. J.C. van Rossumfinished this restoration in 1999.

Johannes Duytschot could have been the builder who added the Cornet around 1700. In1858, the organ was sold. It was placed in the Church at the Voldersgracht in Delft. In1883, A.M.T. van Ingen moved the organ once again, now to the Oosterkerk. Van Ingen madethe front wider at this time. In 1904, G. Spit built a new organ behind the Goldfus-front,using the old pipes.

In 1971, the Hervormde Kerk of Sassenheim bought the instrument. Organ builder Blankreconstructed the organ to the state it had after the Cornet had been added. Onno Wiersmaand Klaas Bolt were consultants. The lengths of the pipes were reconstructed, but thenicks and the mouths were left unchanged.

The restoration by Van Rossum included lowering the wind pressure to 68 mm (a valueindicated by the front pipes H-g# of the Prestant 4) and correcting the voicing. Themouths of the pipes had to be left unchanged once again. This limited Van Rossumspossibilities considerably. Despite the remaining clearly audible alterations to the 17thcentury organ, and although the acoustics are not very good in Sassenheims villagechurch, the organ still sounds convincing and inspiring.