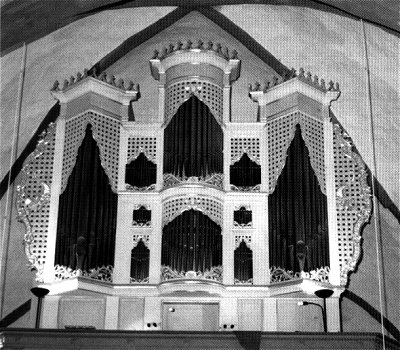 In 1995-1998, the organ builder Kristian Wegscheider(Dresden, Germany) restored the organ that Matthias Friese built in Zettemin (Germany) in1780. Matthias Friese was the ancestor of the most important organ building dynasty in theGerman region of Mecklenburg. Several of his organs have been restored to date.

The organ at Zettemin originally had 23 stops. In 1869, Griszkewitz altered itconsiderably. Kristian Wegscheider reconstructed the original situation, although theorgan clearly showed that Friese had been self-taught.

Wegscheider learned his profession from Jehmlich (Dresden). He prevented theLütkemüller organ at Güstrow (Dom, 1869) from being replaced by a new instrument. Whena comparable attempt with respect to the Buchholz organ at Greifswald failed, he openedhis own organ workshop.

The organ at Zettemin sounds clear, colourful and natural, almost as if nothing hadbeen done since 1780.