The history of the organ in Russia by Pavel N. Kravchun 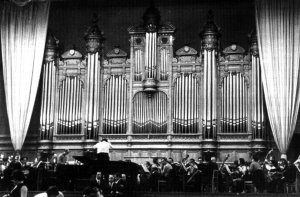 Thefirst sign of organ culture in Russia is a document from the 11th century. In the 15thcentury, Moscow became the main city of Russia. Its organ culture was influenced byItalian, Dutch, German and English organ builders and musicians. The Orthodox Churchbanned organ music categorically. This did not prevent organ culture from becoming quitelively: it was characterised by secular music on relatively small organs.

Czar Peter moved Russias capital to St. Petersburg. Around 1700, he orderedSchnitger to build two organs. The organ became a church instrument now as well, as manywestern churches were founded in St. Petersburg. This development lasted until therevolution in 1917. Important organ builders were Franz Krisnik (1741-1802) and GeorgMaelzel (1807-1866). After them, German organ builders like Ladegast, Sauer and Walckerbuilt most organs. Cavaillé-Coll built only one organ, in the Conservatory at Moscow(1899).

After 1917, Russian social, cultural and spiritual life was minimised. Organs and organmusic were neglected. A revival took place under Chroesjtsjov in the 1950s and 1960s;organ builders from Eastern Germany built some instruments, and organ music was taughtagain at several Russian conservatories.

The situation since 1989 is rather bad. Nevertheless, there are signs of hope: in the1990s, several new organs were built, and the number of Russian organ builders, among themPavel Tchilin in St. Petersburg, increases.