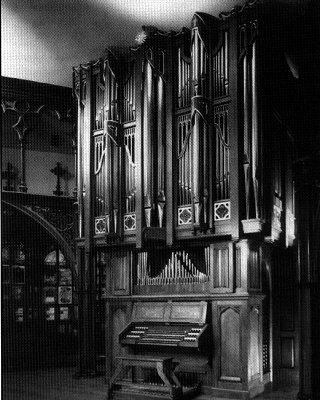 Threeorgans give an impression of the diversity that characterises contemporary American organculture.

The first instrument is the Schoenstein organ in St Pauls, Washington D.C., builtin 1996. The firm claims to be dedicated to expanding the tonal color and dynamicrange of the pipe organ. Director Bethards wants to develop a contemporary organbased on knowledge of ancient organs. Remarkable is the design of the swell boxes: bothenclose an additional box. The organ has divisions placed in different parts of thechurch. Some stops are copies from Willis or Skinner. Some of the lowest stops of thePedal are electronic.

The second organ is the instrument of Grace Episcopal Church, Washington D.C., built byA. David Moore. Again we encounter different worlds in one instrument: German principalsstand next to French-oriented reeds.

The third organ is the Fisk organ in the Little Church around the Corner ofFifth Avenue, New York. The instrument was built in 1988 and has 32 stops. This organ,too, is a mix: apparently, Voix Céleste and Schnitger-Dulcian do not exclude one anotherin the current Fisk philosophy. The three manuals are named Great,Swell and Brustwerk.

The search for convincing combinations shows that all of these organs are usable tomake music, but they do not really support the search for authenticinterpretations.