The English Cathedral Organ in the 20th Century by Nicholas Thistlethwaite 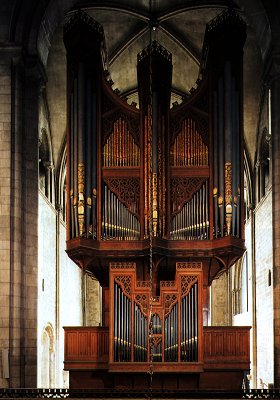 The historyof the modern English Cathedral Organ begins in 1896, the year Robert Hope-JonessWorcester Cathedral organ was inaugurated. He applied electricity and placed sections ofthe instrument in different parts of the church, all playable on one console. The reasonfor doing this was the demands of musical practice in great cathedrals, which began todevelop rapidly around that time. Nowadays, several sorts of services are held indifferent parts of the cathedral, as well as concerts and music congresses.

The organ builder has to solve two problems in this respect: where to place the organ,and how to control it. Hope-Jones was inspired by Willis to build separate divisions; newwas his solution to apply electricity. This is important for three reasons: electricitymade it possible to increase the size of organs despite the limited room for pipes inmedieval cathedrals; to place the console in such a way that the organist could judge theeffect of his own playing accurately; and to place strong stops or organ divisions wherethey were needed: in the neighbourhood of the congregation in order to lead congregationalsinging.

Corrolary to the increase in size of organs was the increased number of accessories. Asa result, console design became an important aspect of organ building practice.

Three periods can be distinguished in English cathedral organ building: up to about1920, the organs were pneumatic; from then until about 1975 they were electro-pneumatic;after 1975 tracker action systems were again sometimes used. The tonal designs of organswere influenced by Harrison & Harrison in periods 1 and 2, whereas Mander should benamed with regard to the development of tracker organs.

It is to be hoped that the 21st century will see a move away from monster organs and anew willingness to match instruments to distinct liturgical spaces and tasks. That wouldrepresent the final modification of Hope-Joness ideas: by exploiting selectivelyelectricity, but rejecting his notion that an organ dispersed around the building couldadequately serve the needs of a great cathedral.