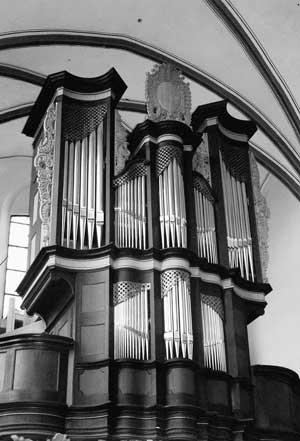 In 1752 Ludwig König built a two-manual organ in thePaterskirche at Kempen. In 1848 Joseph Koulen changed the instrument. In 1917 the frontpipes were removed for the arms industry. In 1925 Weigle built a new instrument in theKönig case. The organ was dismantled in 1979.

Ute Gremmel-Geuchen initiated the reconstruction by Verschueren Orgelbouw (1996-2000).The original concept was enlarged; the organ has a pedal division now, situated behind theoriginal case.

The organ is very versatile. Not only 18th-century music sounds well, but even Brahms,since the 8 stops can be combined. The Cornet and reeds make classical French organmusic sound convincing as well.