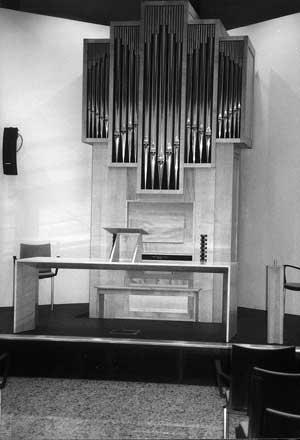 In 2000, theorgan building company Gebr. van Vulpen (Utrecht) celebrated its 60th anniversary. Rijkand Jos van Vulpen built their first instrument in 1939. In 1940 they established acompany in Utrecht. Their brother Evert joined them in 1952.

The history of the company can be divided into four periods. In the first one(1940-1950) the company was started up. Between 1950 and 1970, Van Vulpen was successfulwith instruments that were influenced by the organs of the Danish company Marcussen andthe philosophy behind them. Consultant Lambert Erné stimulated this strongly. The maincharacteristics of the third period are the standardised chamber organs and an increasinginterest in historical instruments. Van Vulpen restored for example the Bätz-orgel (1831)in the Dom at Utrecht (1973), the Duyschot-orgel (1696) and the Van Deventer-orgel (1756)in the Grote Kerk at Nijkerk (1976-1988). In 1987, the fourth period began. New organs arebuilt now with a view to historical styles, be it in combination with a modern front(Zuidhorn, 1989) or with a historically oriented one (Ouddorp, 1995).

The youngest Van Vulpen organ stands in the Hospital De Gelders Vallei at Ede. It issmall, with refined voicing that makes the instrument sound convincing despite the dubiousacoustical environment.