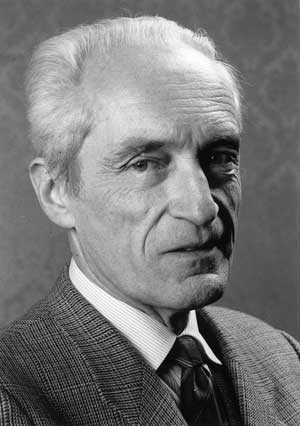 Gustav Leonhardt(1928) is one of the most influential harpsichordists of the 20th century. He has taught countless young musicians. As an organist, Leonhardt is far less well known.Nonetheless, he has been influential in this respect as well, which made the RoyalDutch Association of Organists decide to name him an honorary member.

Leonhardt studied at Basle in the 1940s: The Schola Cantorum was back then theonly institute in the world where you could study old music in all its aspects. InSwitzerland he got acquainted, together with his teacher Eduard Müller, with new organsbuilt in historic styles. In The Netherlands Hans Brandts Buys influenced him.

Leonhardt was professor at Vienna and Amsterdam. In Amsterdam, he was appointedorganist of the Eglise Wallone, with its Müller organ from 1734, which he thinks is oneof best preserved Müller organs. He recorded music of Froberger, Couperin, and DeGrigny on it. Indeed, music that does not actually belong there. On the otherhand: what should you play on such an organ?

Leonhardt has his own perception of the history of organ art. In the 19th centurythings changed so completely that the organ actually became another instrument. For present-day organists this is a problem; harpsichordists do not have to deal withsuch problems. How can a man serve two such different masters? I dont believe he can I certainly can not.

The harpsichord is my life, the organ is in a way a luxurious extra to me. It isa different instrument; you can be crazy about an organ, I think.