Bach in France around 1900 by Kurt Lueders 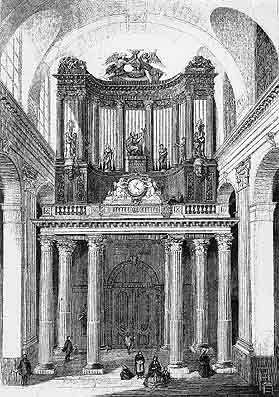 It would be an oversimplification to claim thatBachs music was simply forgotten in France around 1900. The music wasavailable in print shortly after the publication of it in Germany. Louis Niedermeyer in1857 stated: Bachs music is the best ever written for the organ.

In the Paris conservatory, François Benoists students had to perform a BachFugue as part of their exams. Under the tutelage of César Franck, who followed Benoit,students were required to play Bachs great free organ pieces. After Franck there wasCharles-Marie Widor. He introduced new perspectives on technique and interpretation.Alexandre Guilmant, who taught after Widor, was interested in a wider range of early musicthan Bach.

Bach interpretation around 1900 was characterised by a merging of ideas of students ofFranck, Gigout and Lemmens. Widor, who was a student of Lemmens, focused on dignity andaudibility of polyphone structures with respect to tempo; it is very difficult togeneralize about tempo matters, as in actual practice the French organists played quitefreely. Their articulation did not follow strict rules either; yet a consistent rule was alegato touch for melismatic passages and detached performance of rhythmic leaps andsyncopations. Writers and teachers made regular reference to violin bowing as anappropriate model.

Registration considerations were dominated by the need to find a balance between thepreponderant reed timbre and the timbre of the rest of the stops of the Cavaillé-Collorgans. The basic sound used was a plenum. In the typical performance of a fugue, theperformer would start without the mixtures which would then be added gradually.