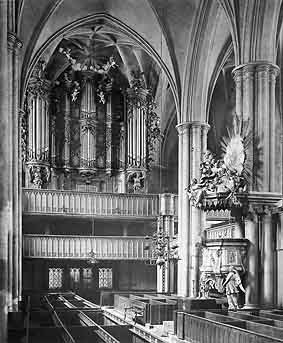 In the middle of the 19thcentury, the great German poet Heinrich Heine named Berlin The Capital ofBach. Many Berlin organists were involved in the discovery and performance of themusic of J.S. Bach. August Wilhelm Bach (1796-1869) was one of the most prominent amongstthem. He collected old editions and manuscripts of J.S. Bachs music. He knew otherimportant collectors of musical sources, like Georg Pölchau and duke Von Voß. Bach wasappointed organist of the Marienkirche in 1816, in 1832 he was appointed leader of theRoyal Institution of Church Music.

The organ in the Marienkirche (1723) was reconstructed in the 1820s after Abbé Voglerhad carried out a simplification. Bach acted as consultant to thereconstruction. The Wagner-organ was enlarged by 16- en 8-foot stops and a swell box.

A.W. Bach possessed copies of BWV 531, 533, 539, 544, 548/2 (partly autograph), 590/1and a collection of copies by Johann Christian Kittel. His correspondence reveals that hehad studied these sources thoroughly. He guarded his collection zealously andscrupulously: for instance, he did denied Mendelssohn to make a copy of BWV 533(Mendelssohn managed to make a copy yet, aided and abetted by his student colleagueFreudenberg).

In 1827, Bach led a partial performance of J.S. Bachs B minor Mass. In 1834, arendition of the complete composition followed. His interpretation of Bachs organmusic was characterised by the absence of registration changes; though he did changemanuals, for example in the Dorian Toccata. The influence of Bach had was such that it wasnot until the end of the 19th century that Berlin organists managed to break away from itand introduce a more modern interpretation of J.S. Bachs organ music.