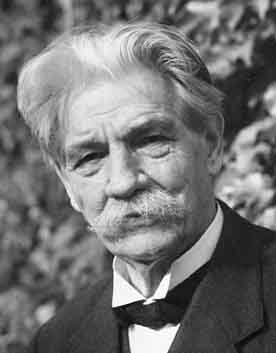 Albert Schweitzer(1875-1965) was a student of Charles-Marie Widor. Widor was the first French organist toteach Bachs music to his students. He confessed to Schweitzer that he did not quiteunderstand Bachs chorale preludes; Schweitzer pointed out that understanding thetext was the key to a correct interpretation. Widor encouraged Schweitzer to write hisfamous book about Bach: J.S. Bach (1908).

According to Schweitzer, Bach was an architect who had completed the gothicart of music; a poet and a painter with music; a mystic. The essence of gothic art forSchweitzer was the free connection of different (musical) lines to a new unity. This viewof Bachs music resulted in a new condition for playing Bach properly: one had teunderstand the architectural structures of his music. As a poet and painter, Bach was ableto explain in his music aspects of texts that could not be explained in words. Properunderstanding of how these motives are expressed is another condition for playing Bach.Mystic meant to Schweitzer becoming one with Christ, finding peace and ease in the unitywith the eternal will of God. The difference between Bach and other mystics is that Bachuses music to express this state of grace  whereas other mystics use words.

According to Schweitzer, the true organ was the Bach-organ.This true organ was a new organ type that was based upon organtypes of thepast.

To Schweitzer, Bach was an artist who guided people to inner peace. This correspondswith Schweitzers own self-perspective as a musician, as well as his humanitarian andspiritual ideals.