Trivento and other organ-like instruments 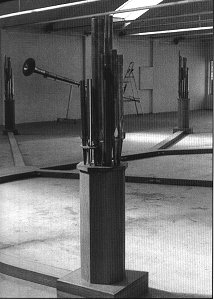 In the 20th century, several organ-like new instrumentshave been developed. An early example is the telharmonium by Thaddeus Cahill, anelectrical instrument from 1906.

Most new instruments are meant to make sound-scapes, rather than to perform music inthe form of compositions that are based on traditional sets of rules. Ferruccio Busoniwrote at the beginning of the 20th century: ‘Frei ist die Tonkunst und frei zu werdenihre Bestimmung’ [Music is free and to become free is its goal]. The bruitists wereamong the inventors of new instruments that were made according to this idea. A secondphase started after 1950, as Mauricio Kagel, Nam June Paik and Henry Partch developed newinstruments.

In The Netherlands new organ-like instruments are built on a regular basis, by artistslike Hans van Koolwijk, Horst Rickels and Gerrit Terpstra. In Nnovember 1999, Rickelspresented Trivento, made by the organ builders Pels & Van Leeuwen. It consists of aconsole and six columns of pipes that are situated around the audience. In each column,the pipes of two of the twelve keys are grouped, so the player can realise remarkablespatial effects. Furthermore, he can influence the wind-pressure and consequently thepower and the pitch of the instrument. Trivento has five stops and two small bellows.