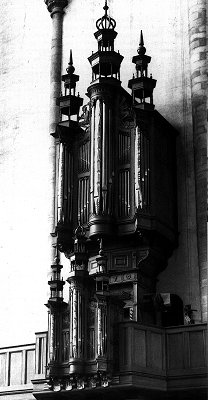 In het ORGEL 1999/5, Wietse Meinardi criticised historicism inorgan building. In het ORGEL 1999/6, Hans Fidom, Sicco Steendam and Wim Winters reacted;in het ORGEL 2000/1, Tjibbe Heidinga and Sietze de Vries contributed to the discussion.The editorial board received two more reactions. Engineer and organist Joop A. Klaassenstates that the 20th century was characterised by helpless desperation. In the 1960s, theorgan scene became increasingly dominated by a museum-like culture, based on respect forhistoric organs. This culture will dominate the near future as well, Klaassen expects, asthe interest in organs is not decreasing among music lovers. Organist Jan-Piet Knijfffocuses on a detail of the discussion. Wim Winters had said that the measurements ofhistorical consoles appear to be the right ones strikingly often. Knijff, who is rathertall, asks: the right ones for whom? He pleads for adjustable benches and desks. Anadjustable pedal, like the one he tried in the National Cathedral at Washington DC, is avery useful option as well to him. Knijff stresses that he does not want historic organsto be demolished; yet, they should have an adjustable bench.