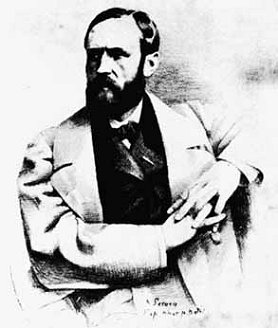 Nowadays, Louis James Alfred Lefébure-Wely (1817-1869) is considered a composer of decadent organ music, who wrote some pompous marches. The reproach is undeserved, as he played a major role in the development of the French symphonic organ style. He was a close friend of organ builder Aristide Cavaillé-Coll, and he inaugurated many new Cavaillé-Coll organs. Furthermore, he was appointed organist at, successively, three important Cavailléé-Coll organs in Paris: at St.-Roch, La Madeleine and St.-Sulpice. Lefébure-Wely was the first organ composer to use the characteristic possibilities of these organs effectively in his compositions. This can be concluded, for instance, from his registration indications: Lefébure-Wely often combined several 8 foot-stops, and made optimal use of stops like the Flûte harmonique and the Basson-Hobo. Lefébure-Wely was an advocate of the modern harmonium as well. He published three methods for the instrument; in his compositions he explored its possibilities thoroughly.