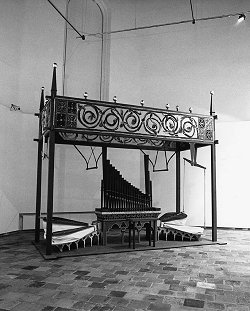 Until 28 November,the Drents Museum at Assen presents an exposition called Excavated sounds /archeologic musical instruments of all times. After 28 November, the exposition willtravel to other European museums. A very interesting piece is the medieval organ built byWinold van der Putten. The concept of the organ is based on De fistulis Organis (writtenby an anonymous author from Bern in the 10th century), Schedula Diversarum Artium (writtenby the Benedict monk Theophilus in the 11th century), and a drawing in the RutlandPsalter, published around 1260 (British Library, MS add. 62925). The organ has 19 keys andtwo rows of wooden, conical pipes. The measurements of all pipes are based on one mould;only the length and the placement of the mouth vary, as the nut of longer pipes is larger,and consequently placed higher than in smaller pipes. The wind-chest consists of 19grooves, each closed with an upper board. The wind can enter a groove when a small slideris drawn. The sliders can be operated by keys, which are attached to the sliders by asimple mechanism, quite similar to the one used in the antique water organ described byHero. The wind-chest is connected to four large bellows, constructed like the bellows Vander Putten examined in the 300 year old forge at Hellendoorn. After the expositions, theorgan will be placed in the Alte Kirche at Rhede, Germany, where it will be used for studyand concerts.