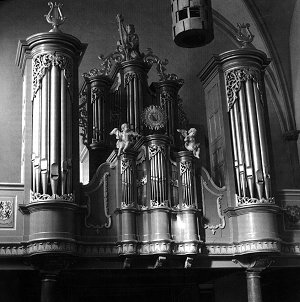 The annual congress of the International Association forOrgan Documentation took place in Utrecht this year (14-16 May). On 19 June the FoundationGroningen Orgelland (SGO) celebrated its 30th anniversary with asymposium. The program of the IAOD-congress included lectures by Paul Peeters, StefTuinstra and Rudi van Straten. In addition, some young organologists introducedthemselves. The keynote speech of Paul Peeters ended in a single question: Can weconclude that the organ has reached the end of its development, or is the instrument aboutto begin a new development? Stef Tuinstra pointed out that each organ type needs itsown wind system; a baroque organ requires, for example, a less even wind than a romanticorgan. Tuinstra concluded that a synthesis of both organ types is impossible. Rudi vanStraten, Organ Consultant for the National Monument Service, told of the inventory of allDutch organs being made by the Service. The determination of historical value containedtherein is necessary for the evaluation of applications for subsidies.

The IAOD-congress was opened by concert by Gert Oost on the organ of the auditorium of the university of Utrecht.  Photo archief Universiteit Utrecht

The SGO-anniversary was celebrated with lectures by HansDavidsson, Peter van Dijk, Bernhardt Edskes and Henk van Eeken. Davidsson and Van Dijkpointed out how important the Schnitger Commemoration in 1969 at Groningen had been: itwas the start of the period, in which historic organs form the basis of contemporary organbuilding. Davidsson discerned four aspects: restoration, replication, unequaltemperaments, implementation of new ideas. Van Dijk sketched the development of organbuilding since 1960, which was strongly influenced by Lambert Erné (until 1970) and KlaasBolt (after 1970). Bernhardt Edskes spoke on the work of organ builder Christian Vater(1679-1756), Henk van Eeken on the Garrels/Radeker organ at Anloo (1718). Van Eekenremarked that organ builders should aim to achieve organs that are as good asold.