The restoration of the Sauer organ at Bremen Cathedral 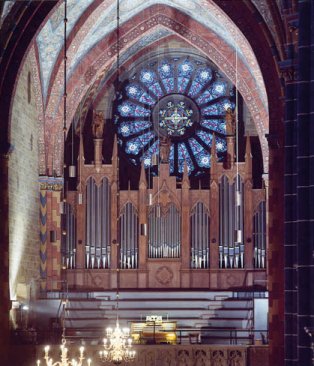 The restoration of the Sauer organ at Bremen cathedral

Orgelwerkstatt Christian Scheffler (Frankfurt/Oder, Germany) restored the organ in Bremen Cathedral in 1996. It was built in 1894 (PIII/65) and enlarged in 1905 (PIV/73) by Wilhelm Sauer. In 1926 and 1939 the Sauer-company (Wilhelm died in 1916) changed the organ according to the principles of the Orgelbewegung. In 1958 Walcker Orgelbau built a new electro-pneumatic action and a new front (PIV/100). Scheffler reconstructed the original pneumatic action, but left the new console electric. He also reconstructed and enlarged the disposition to 98 stops, of which 13 date from 1926/1939, at the wish of the director of music at the cathedral.

Apart from the 13 stops from 1926/1939, the Bremen organ can be used as a real Sauer organ. It plays like a pneumatic instrument and sounds the way a big Sauer organ is supposed to: colourful and mighty. Only a few details are less successful, like the slightly too loud Piccolo and Harmonia on Manual III.

All in all, Scheffler and voicer Matthias Ullmann have once again shown themselves to be experts on German organ building around 1900.