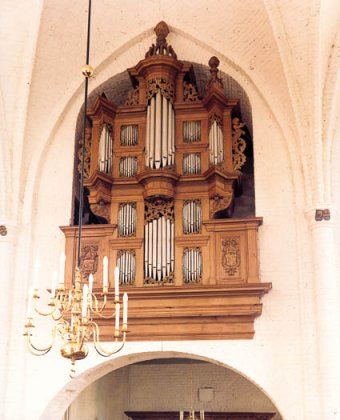 The first evidence for the accompaniment of congregational singing in the Netherlands dates from the 17th century. The influence of the opinion of the Dordrecht synod (1574) – that organ music makes people forget what they’ve heard and is comparable with speaking in tongues – lasted long: even in the 19th century less than half of the Dutch churches possessed an organ. Schnitger’s activity in the Netherlands thus coincides with a process of accepting organ music in the liturgy. Chorale books by Witvogel (1730), Van Blankenburg (1732) and Hurlebusch (1746) show how congregational singing was accompanied. It seems that reeds were chosen before Mixtures. Furthermore, the melody could be played on a separate manual, with Sexquialtera or Cornet.