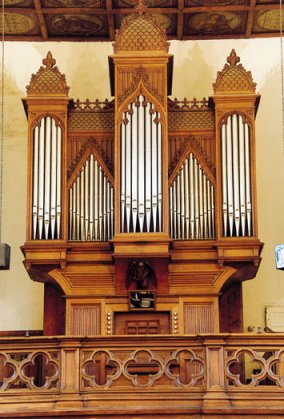 Organ builder Arnold Clerinx (1816-1898) died 100 years ago. Clerinx (St.-Truiden, Belgium) became famous for his economy chest, patented in 1847. In this chest, each channel was divided into three sections. The pallet box contained two pallets per channel, so some stops could be played on Manual I, other ones on Manual II and yet other ones on both Manuals.

The Clerinx organ in Theux (Belgium 1873)

Clerinx changed his style twice, so three periods can be distinguished. The first period (until 1847) is characterised by fresh, clear and firm sounding organs. They contain a treble Sexquialtera and a complete Fourniture. The second period began with the introduction of the economy chest, which was much more reliable than comparable inventions of Clerinx’s competitors. The organs with economy chests contain ‘economy mixtures’ as well: the 4′ and 2′ ranks, which were already represented by Prestant 4 and Doublette 2, were omitted from these stops. Clerinx used his economy chest only in smaller organs. The third period began around 1867, when Sexquialtera, Sexquint, Violine 2 and Flagéolet were replaced in his specifications by stops that gave the organ a more fundamental sound.

Most of Clerinx’s organ cases are based on the same simple scheme. Sometimes Clerinx organs used fronts designed by architects.