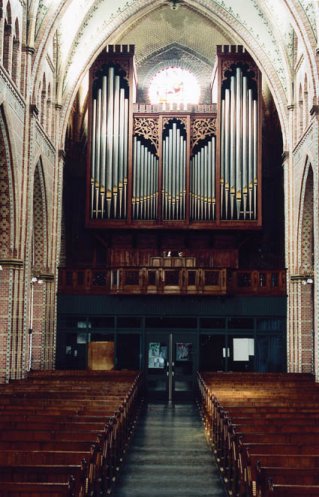 On 7 March 1997, the restored organ in the St.-Martinuskerk at Sneek (PII/27), was reïnaugurated. The organ, built in 1891 by Maarschalkerweerd, was restored by Flentrop Orgelbouw. Jan Jongepier was advisor.

Maarschalkerweerd learned organ building with Jonathan Bätz. His first organs show the influence of Bätz, but soon Maarschalkerweerd developed a style of his own, with free-standing consoles and harmonic flutes. Maarschalkerweerd had an open eye for developments abroad: he followed Cavaillé-Coll in using Barker’s pneumatic lever, different wind pressures and orchestral dispositions. The organ at Sneek shows this French influence. In the 1890s Maarschalkerweerd began to build in a more German style, with tubular pneumatics.

Since 1940 several plans were developed to change and repair the organ. In 1963 the church tried to sell the organ, without success. In 1968 organ builder Vermeulen repaired the instrument.

Now that the organ is restored by Flentrop, the sound architecture of the organ appears to be very interesting. For example: the clear sound of Prestant 8 and Octaaf 4 forms the basis for the Mixtuur. Quint 3 and Octaaf 2 sound somewhat more ’round’, thus providing a basis for the Cornet. The relationship between Hoofdmanuaal and Zwelwerk is dependent on this less intense Hoofdmanuaal sound (forte, but without Trompet and Mixtuur).

Of course, some elements we don’t understand yet, e.g. the function of the Flûte harmonique in the Zwelwerk: is it a solo or an ensemble stop? But aside from a few questions like this one, we can conclude that the organ at Sneek makes clearly audible how Maarschalkerweerd used foreign influences to create his own individual style.