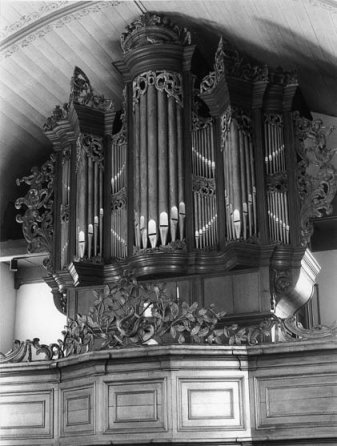 The organs that Albertus Anthoni Hinsz built in Friesland between 1762 and 1783 can be classified into three categories: organs with Great, Choir and Pedal, organs with Great and Choir, and organs with one manual. The organ at Driesum (1783) belongs to the last category. Bakker & Timmenga restored it in 1997. Jan Jongepier was advisor. Characteristics are the relatively large number of flute stops, the 5 1/3-ranks in the Mixture, and the absence of a 16 Bourdon. Playing literature is almost impossible with this Mixture, but the Mixture functions very well in root-position chords.

Frans Caspar Schnitger Jr. maintained the organ at first; from 1801 on Van Gruisen took over. In 1868 Willem Hardorff worked on the organ (probably he added the 8 Viola (which disappeared in 1967), the Bourdon 16 with pipes of the former 8 Holpijp replacing the Cornet, revoiced the 8 Fluit does as an 8 Holpijp and removed some Mixture ranks). In 1907 Klimstra maintained the organ (probably he removed the Vox humana and added a new 2 Octaaf). In 1951 Vaas and Bron replaced the diagonal bellows with a horizontal one. After several attempts to restore the organ, it was almost unusable in the 1980s. The goal of the 1997 restoration was to reconstruct the 1783 situation. After the restoration of the chest and lowering the wind pressure to 70 mm, it became clear that the pipes were preserved almost untouched, so the organ is now one of the more important organs in Friesland.