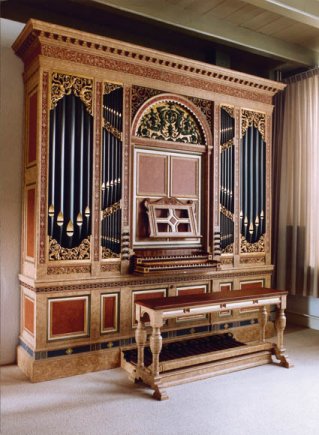 Recently, two new instruments were built for relatively small rooms: one by David Kunst (for organist Kees van Eersel, living at Kloetinge), and one by Hans van Rossum (for the School of Music at Prague).

Case and technique of the organ at Kloetinge show Kunst’s thorough knowledge of the history of arts and craftsmanship. The organ is intended for the preparation of concerts on church organs, so the touch is quite firm and the sound is apt for more than just one style of music. The voicing, in many respects beautiful, had to eliminate transients with small nicks; as a result the sound of some pipes is somewhat uninteresting.

The Hans van Rossum organ at Prague is a combination of a one-manual Italian organ, based on a Principal 8 and a ‘regale con il suo flauto di legno’: a Regal 8 and a open wood Flute 4. The first part is modelled on the Russo organ of Robert Kohnen at Brussels (1713). Lack of time unfortunately prohibited finding a good model for the ‘regale con il suo flauto’; so Van Rossum chose North German examples of these stops as models, considering the Italian influence on the baroque Northern German compositional style. Although each manual is very convincing in itself, combination of the two is difficult as a result.