The organ builder König and the organ at Alden Biesen 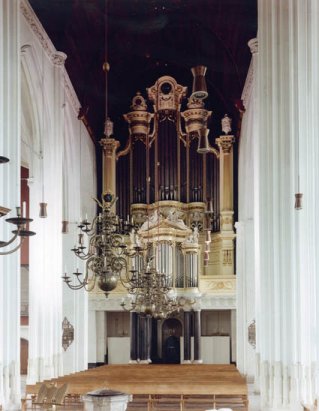 The organ builder König and the organ at Alden Biesen

Literature on the organ builders König is rare. The origins of Balthasar König (ca. 1685-1756/1757) from Ingolstadt, said to be the earliest ancestor of the family, are not yet certain. Ludwig König (1717-1789) was the most important organ builder of the family. He influenced the concept of the organs in the Rheinland (Germany) until the middle of the 19th century.

In 1797 the French government confiscated the clerical possessions in the Southern Netherlands. As a result, the König-organ at Alden Biesen, built in 1787-1788, was moved to the St.-Janskerk at Waalwijk (Holland) by the company Gebroeders Franssen (Horst). Johannes Vollebreght repaired and changed the organ in 1846. After that, Broekhuijzen wrote a description of the instrument. The combination of this description and some photographs of the organ from 1922, offer the opportunity to reconstruct the original König instrument: it was placed on the gallery rail, with an 8 Hoofdwerk (Great, 13 stops) and a 4 Onderpositief (Positive, 5 stops).

In 1876-1877 Pierre Schyven (from Brussels) renovated the organ. In 1923 the instrument was torn down along with the church. A new church was built. In it Bernard Pels & Zonen (from Alkmaar) built a electropneumatic organ with 16 stops. This organ contains 4 stops from the original König organ at Alden Biesen.